Got Win95b loaded up on it, don’t have USB working yet, but the rest is running like a champ. I haven’t investigated the USB issues, but I believe the driver was just not part of any of the packages on gigabytes site, I might need to dig around SIS’s site for a while to see if they have 95b drivers for the USB chipset. USB is not real critical to me in this build though, since any file transfer will likely be from the network, but it would be nice to say its working

It’s kind of ironic I stuck this in a Compaq case, because I guess this particular GA-5SMM was out of a Compaq with its nice big red “Compaq” BIOS splash screen. 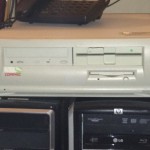 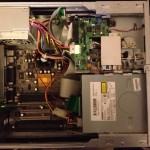