I had bought one of these BRAND NEW in late 1997 (xmas time), in fact it was the one and only “NEW retail” computer I ever bought, I regrettably sold it on ebay after upgrading to a Pentium 3 laptop, so I bought this one recently.  It replaced the Zeos 486 laptop I had prior.

This laptop was utterly destroyed in shipping, the seller basically tossed it loose fitting in a box.  I had to glue up A LOT of internal plastic supports, the display latch, and it even broke an inductor/choke off the LCD backlight inverter PCB that I had to re-solder.  I am claiming victory, I have it working and in one piece again. 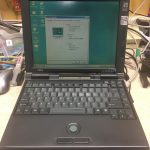