Switched DNS for my sites to Cloudflare, since my sites are all just small hobby sites I can use their free plan. I can leverage their CDN and DDoS protection, plus free SSL.  Should hopefully make the site more responsive and protect my network and web-server too.

Also picked up some vintage gear while I was there, a cool painted Zenith Z-180 series laptop, and a Grid 1520 laptop, some misc PC parts like ISA NIC’s and some IDE/Floppy cables.  Also a VERY cool red Bell System Call-box, I will be mounting this

Got everything moved over to the new backbone switch, it’s just temporarily installed on the wall until we get the 19″ rack cabinet moved into the basement (it needs to be disassembled first to fit down the stairs).  Should be some noticable power savings too, this uses 1/4 of the power that the previous Avaya/Nortel 5510-48 switch used.

Mess of wires until rack gets installed.

We had a basement flood about 2 months ago now caused by a burst water heater, it destroyed some of the infrastructure systems for our house, unfortunately my NAS servers, some network gear, and house mechanical systems were all flooded and damaged/lost.

About half the water pumped out, everything that was stacked or on a low shelf floated around and made a HUGE mess.

Storage area mess, most the plastic totes I thought would be flood safe all floated, tipped over, and filled with water anyways, anything that was on top of them tipped off too.

Luckily my Router, CCTV surveillance server, and domain controller were all sitting on top of the NAS servers and were spared from the flood.

I have an old slow HP Microserver L40N acting as my NAS for the time being, however, I will be picking up something faster, and rack-mountable, since I was able to get a “1/2 rack” that was being disposed of from work.  I have a new network switch (with 4x10G SFP+ ports) on the way, I will be installing all the current and future equipment into the rack once I get it down into the basement (it needs to be disassembled, it will not fit down the stairs in one piece).  I will be keeping equipment (other than maybe a UPS/PDU) out of the bottom 12U just in case we ever flood again.

New mechanical systems in the basement, and storage area cleaned up.

My friend Ryan and I drove the ~4.5 hours from Minneapolis, MN to Appleton, WI to visit our friend Garrett to geek out and dig through his Bithistory.org warehouse.  We had a great time hanging out as usual, and hauled home some goodies. 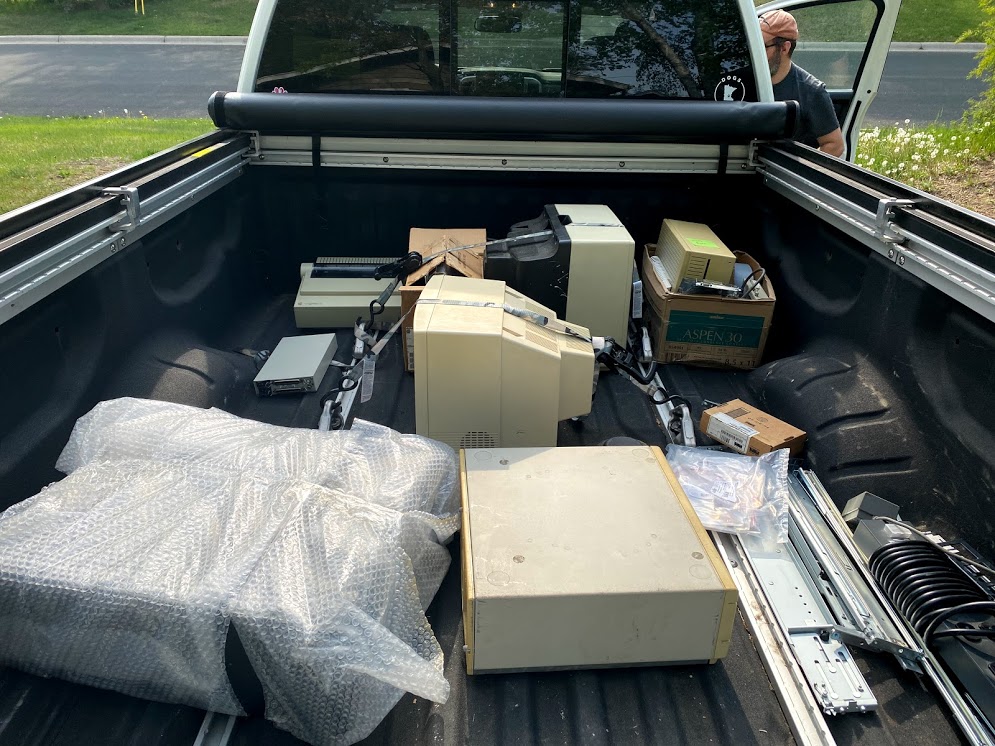 Our apologies, the UPS running our: modem, router, switch, and the raspberry pi running this server died yesterday morning (ungrateful thing, I just changed out it’s batteries and special 24volt fan too).

We’re running on utility power for now, the UPS will have to be replaced soon.

I am updating the network cabling to my office, previously I had a single-gang keystone with 2x cat5e, and 1x cat5 (split out to 4x phone jacks) for all of my office.  I have cut in a new dual-gang box and will be pulling two more cat6 cables, in addition to the 3x cat5e and OM4 LC fiber I pulled in already.

With the additional cable pulled to the office I will be able to eliminate the noisy power-hog network switch I have in there and have everything directly cabled to the master switch in the basement.

We’ve recovered all the lost content, and even added a few more pages that we’d not gotten around to prior to loosing our hosting.  We’ve still not heard a peep from our former webhost, and his site is still dark all these months later.

Self hosting from our Raspberry Pi has actually been working quite well, though with less bandwidth obviously media content is not loading as fast as it once did, but it’s tolerable.  We’ll definitely be upgrading our internet service the second that we’re able to get a connection with more than 20mbps upstream, unfortunately we’re about 8 blocks away from being able to get symmetrical gigabit “GPON” service 🙁

This all started on July 31st 2020 when our former webhost (azcappy.com) went dark along with all our content, we’ve restored some content, but the backups were older than they should have been (I was lax on running manual backups), the most recent backup from January 2020 had the wrong database file saved, so we had to restore the database back to October 2019.

I will be working on recreating the lost pages by hand, though if azcappy ever comes back online I should be able to log in there and grab all of the most current content.

We’re self-hosting this site from a Raspberry Pi 4 Model B 4GB, on our 20mbps (upstream) VDSL2 connection, so we are somewhat bandwidth limited now. Our previous webhost had pretty strict CPU and memory (128mb) constraints on our plan, so this Pi is quite a bit faster and much less memory choked.  Due to previous hosts resource constraints we had resorted to using a page caching plugin for quick page loads, now the Pi can build/render content dynamically just as fast as the previous hosts page caching did, so page cache has been disabled.