I am updating the network cabling to my office, previously I had a single-gang keystone with 2x cat5e, and 1x cat5 (split out to 4x phone jacks) for all of my office.  I have cut in a new dual-gang box and will be pulling two more cat6 cables, in addition to the 3x cat5e and OM4 LC fiber I pulled in already.

With the additional cable pulled to the office I will be able to eliminate the noisy power-hog network switch I have in there and have everything directly cabled to the master switch in the basement.

We’ve recovered all the lost content, and even added a few more pages that we’d not gotten around to prior to loosing our hosting.  We’ve still not heard a peep from our former webhost, and his site is still dark all these months later.

Self hosting from our Raspberry Pi has actually been working quite well, though with less bandwidth obviously media content is not loading as fast as it once did, but it’s tolerable.  We’ll definitely be upgrading our internet service the second that we’re able to get a connection with more than 20mbps upstream, unfortunately we’re about 8 blocks away from being able to get symmetrical gigabit “GPON” service 🙁

This all started on July 31st 2020 when our former webhost (azcappy.com) went dark along with all our content, we’ve restored some content, but the backups were older than they should have been (I was lax on running manual backups), the most recent backup from January 2020 had the wrong database file saved, so we had to restore the database back to October 2019.

I will be working on recreating the lost pages by hand, though if azcappy ever comes back online I should be able to log in there and grab all of the most current content.

We’re self-hosting this site from a Raspberry Pi 4 Model B 4GB, on our 20mbps (upstream) VDSL2 connection, so we are somewhat bandwidth limited now. Our previous webhost had pretty strict CPU and memory (128mb) constraints on our plan, so this Pi is quite a bit faster and much less memory choked.  Due to previous hosts resource constraints we had resorted to using a page caching plugin for quick page loads, now the Pi can build/render content dynamically just as fast as the previous hosts page caching did, so page cache has been disabled.

My friend Ryan P and I picked up a few things for our collections over the past weekend from my friend Garrett’s BitHistory.org warehouse. The highlights being a nice Tandy 1000TX, a Commodore Amiga 2000, an IBM 5153 CGA monitor, some accessories (KB/Mice), some misc PC ISA/PCI cards, and finally a pink GTE Starlite phone for my wife’s living room end table.

Load of stuff I brought for Garrett/Bithistory.org

Panoramic shot of the warehouse

Finally got my Raspberry Pi 3 all configured to replace my old outdated power-hog Pentium 4 dial-up server. It’s running Raspbian Buster, with mgetty configured to answer the modems. I have a multi-port USB>RS232 adapter that the 4x 56k USR Modems are connected to. The Pi and RS232 adapter are both mounted on the plywood shop wall. My Avaya Definity PBX provides the dial-tone and ringing, there’s a hunt-group (ext 2222) to dial into for all the modems. 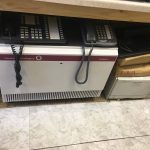 Definity installed under bench in workshop.

Picked up four inexpensive 48-port gigabit layer-3 switches (Nortel/Avaya 5510-48T) to upgrade my network infrastructure, one is acting as the backbone switch in the house, .  The network has been reconfigured some to save power, turns out these Avaya switches draw about 95 watts at idle.  I am down to using two of them, the main backbone one, and one in the workshop.  I have pulled a bunch more cat5e, and one OM4 LC fiber cable up to the office and removed that switch entirely, and for the entertainment center I have bought a small 8-port low-power managed switch.

Also I have pretty well completed integration of the new Avaya Definity G3 system.  It’s now running all the telephones in my home and workshop.  I’m utilizing 2x (out of 4x) Cat6 lines to provide 8 extensions to the house, and a pre-existing two pair cable to extend my Centurylink CO trunk, and “Door Phone” call-box CO trunk to the Definity from the house.  I am definitely outgrowing the cabling capacity to the house from the workshop, I need to add at least one more Cat6 cable, though I am toying with the idea of running a 25-pair cat3 telecom cable, then I could reclaim the 2x Cat6 cables I’m using, and upgrade to 4 connection LACP data link to the workshop.

Definity installed under bench in workshop.

66 blocks cabled to Definity. (3rd block has been added since photo)

Punching down amphenol cable to 66-block

Playing with the Definity using my Lucent Max 900 terminal

The day I picked it up

Couple phones that were included.

Some of my phone display

Spent the past weekend “geeking” out with my friend Ryan P and our friend Garrett of Bithistory.org. Ryan P and I drove from Minneapolis MN to eastern WI to meet up and spend the weekend playing with, and sorting through, retro computers and parts with Garrett. 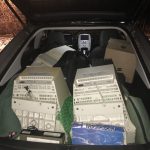 Our haul from the weekend.

I found this Teletype for sale in an antique store in Duluth, Minnesota.

Seems to function in local mode, I need to get the cabling figured out and try to get it working in online mode.

UPDATE: 9/2018: I was able to get this talking to a PC with the right combination of cables and null modem adapter, it was sending/receiving at 300baud.  However I need to source a ribbon for this, the old one is dried up, and fell apart when I tried to open it up to re-ink it. 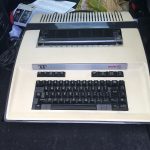 I spent some time last weekend cleaning up the cabling mess for our telephones and dialup server, now it’s not such a disaster.  I ran all the telephone/modem connections to a 66 block rather than just hanging it all off the front of the phone switch. This is now the single oldest piece of computer gear that I own, you can check out the page dedicated to it, which will be updated as I get it working, and learn more about it, but for now here’s a preview of the photos. 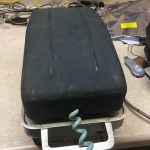 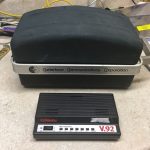 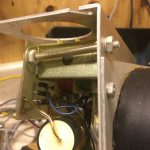 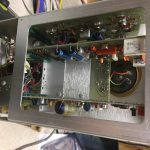 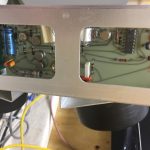 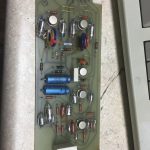 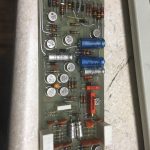 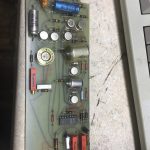