I don’t know a lot about this things specs, but I can tell you its over 1lb, its screen is EL back-lit, it has some kind of accessory port on the bottom, and a PCMCIA (Type II) slot above that (for flash memory cards, IBM offered a 1mb and 1.8mb card, to the tune of $250-300).  No idea what OS it runs, one site claims Zaurus OS, but I am pretty sure that’s incorrect since the 1994 BYTE article says its running ROM-DOS, same site also claims 1mb rom and 1mb ram and a 160×293 resolution on the screen, the ram/rom is confirmed by the article, however screen res is unconfirmed.  According to a 1994 article from BYTE: “The CPU is a 16-bit x86-compatible processor running at 16 MHz, a single-chip design manufactured by Vadem. Simon runs a version of DOS called ROM-DOS, from Datalight, and has 32 KB of ROM dedicated to the system’s BIOS. There’s 2 MB of flash memory that stores Simon’s built-in applications (from 1 MB, using Stacker compression), and another 1 MB of pseudo-static RAM for running the programs and storing user data. Roughly 640 KB of this memory is actually available for your use.” (http://bit.ly/nZhdhe – archive.org copy of BYTE article)

This ones battery is toast, but I have applied power to the battery terminals and this thing does boot up, haven’t ever really played with it much since its kinda hard to use with alligator clips on battery terminals tethered to a bench power supply. Someone brought this in to a computer retailer where I was working over 10 years ago wanting to recycle it, it was something I had never seen before. I wasn’t going to let it go get shredded (it was cool with the store owner, his recycling company charged him per pound, so anything he didn’t have to pay to get rid of was good for him).

NOTE: This is an AMPS phone, and with AMPS service no longer supported past 2008, this is a really big paper weight basically. It is only useful if you have the RJ11 phone-line “accessory port” adapter (which I do NOT own). Even though I cannot use this for anything practically, I am keeping it because it is a VERY cool example of the FIRST SmartPhone, your iPhone/Android’s Great-Grandpa 😉 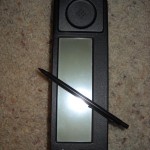 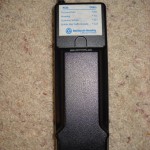 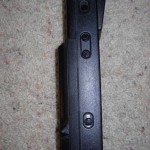 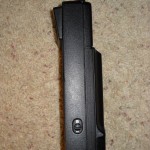 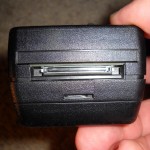