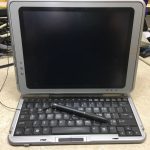 This TC1100 is a fairly boring XP era slate tablet, not super interesting, however I had a very similar TC1000 in the early to mid 00’s, it looked identical (though had Compaq, not HP branding), it used the slower, but much more interesting Transmeta Crusoe CPU, which was x86 “compatible” via an emulation abstraction layer, it was clocked at 700mhz, but ran roughly equivalent to a Pentium 3 500mhz, but at VERY low power consumption for its time (a maximum of 6-watts).  I would love to collect a TC1000 some day again too.