Disney Sound Source (added to my collection in 2005) 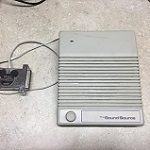 The DSS is a very similar concept to the earlier Covox Speech Thing.