Retired from daily use, it’s been replaced by my Definity system.  I formerly used this system tied with an Asterisk PBX VoIP system, I used this for connecting modems on my various vintage PCs/Terminals to my dial-in server, and for connecting my collection of vintage rotary telephones.  I actually have 2 complete carriers/PSUs/Processor modules, and a slew of extra line/station card modules and phones for this system in storage.

The bulk of this system as shown has been given to my friend Garrett of BitHistory.org, so he can eventually setup his own in-house dial-up server.  I do still have some Merlin stuff lying around though. 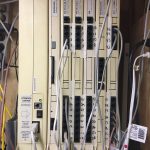 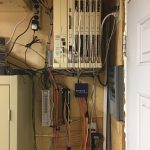